Why was it necessary to revise section 377 of Indian Penal Code?

The term homosexuality has been put in the light lately to spread awareness so as to end the centuries-old discrimination. There are lots of active communities and Non Governmental/Profit Organizations who work day and night throughout the world for this. It is not just India but many other middle-eastern and south Asian countries and even many states in the U.S.A. that do not support but instead harass or even physically harm/legally execute those who go against the order of nature. Before moving onto more details let’s understand the basics.

What is sexual orientation?

Recently the Indian Supreme Court has revised its section 377 and permitted same-sex relationships. There are mixed public remarks. Some welcome this step and say that it’s indeed progressive, and there are also those who are intolerant. Why was it necessary to revise the section 377 of IPC? Before learning this one needs to know what it exactly is. Then we will move on to the myths and facts of homosexuality followed by a few other facts.

Section 377 is one of the laws of the Indian Penal Code that states that people who get involved in unnatural sexual behavior are subject to prosecution such as jail term at the most for 10 years if proven guilty. Those involved may or may not be of the same gender yet are disallowed from what is considered as abnormal. Homosexual practices are one of those. It is 3 years more than a rape accused who is given only 7 years of jail term in total. So basically, a relation between two consenting adults is more serious offense than non-consensual forced relation!

This law was made by the British government when it ruled the country. Most practices in the Indian law and order are based on that same age-old protocols with little alteration till date. But when the transgender community was first recognized as the official third gender in India in the year 2014, homosexuals became hopeful.

There are countless myths associated with homosexuality that prevents people to even get educated properly. Following are the most common myths about homosexual people and facts illustrated in brief.

1. They rape children – People who are attracted towards very young children, whether boys or girls, are termed as pedophiles NOT homosexuals. It has nothing to do with their orientation. Furthermore, most people also think that those (boys) children would turn into gays if raped by a man of older age. People cannot change their orientation one fine morning just because they were harassed by the person of the same gender. I personally know a case of a boy who was minor at the time when he was seriously molested by a (male) teacher but grew up being straight.

2. It is unnatural and uncultured – Being unnatural and uncultured is a diverse topic. If you really want to term things as unnatural then abolish ALL scientific inventions that are practically executed in your surroundings. Human beings couldn’t fly because they didn’t have wings. So, what they did was to invent an airplane. We built houses, blankets, geysers, and leather clothes to prevent ourselves from extreme cold. Shall we consider these behaviors as going against the Mother Nature? Nobody taught us to get attracted towards the people of the opposite gender. We all naturally felt it right after hitting the puberty. The same goes with homosexual individuals. They just didn’t feel it like most of us did but the other way round.

Being uncultured directly implies to being against the set regulations. The weddings started centuries ago so that the concerned individuals from both parties take responsibility of taking care of the born children who would be left by at least one person, mostly men. But now everyone wants to procreate in order to preserve their community, and for that, marriage between men and women became a necessity. Since homosexual people cannot reproduce naturally, they are not welcome at all, even though we all know that scientifically it is now possible to have children, or through adoption perhaps!

3. We can predict them by behavior – We certainly cannot determine whether a person is a heterosexual or homosexual just by looking at their behavior and actions. If you notice somebody acting like feminine despite being male or vice-versa and judge them based on that, you are most likely wrong. There are many cases of heterosexual men acting slightly women-ish and women acting manly, AND there are cases of homosexual men who totally act masculine and women being feminine. There is a huge range of gender identity and expression as well as the genetics other than just orientation that play roles governing an individual’s overall behavior and actions.

4. It’s a mental disorder or illness that needs treatment – In the year 1973, the American Psychiatric Association removed homosexuality as a mental disorder or illness, not because of community inclination but based on lots of scientific researches and conclusions. Therefore, whether (or not) we consider somebody out of normal it doesn’t determine that they’re sick just because their romantic interest is different than the majority. In fact, homophobia is a mental condition that needs treatment since a homophobic can turn violent against those who belong to LGBTQ.

Homo sapiens are not the only ones keeping diverse genders and orientation, but there are nearly 1500 animal species that have the same cases. One might argue that they are animals and animals do not have organized society like us and we are not supposed to behave like animals, but they fail to understand that it is part of their natural instinct and they cannot practically do anything to change through psychological counseling like lots of Indian parents think when they learn about their own children.

5. Surrounded by homosexuals turns a person just like them – This is one of the most hilarious claims made by ignorant individuals. It is not a religious conversion that somebody simply gets influenced by looking at gays and lesbians around. Children adopted and/or raised by homosexual couples can be straight or otherwise, which does not have anything to do with their legal or biological parents or guardians.

Alan Turing, the famous English scientist, also known as the father of theoretical computer science and artificial intelligence, was prosecuted (and later committed suicide by cyanide poisoning) just because he was gay despite his remarkable contribution in scientific researches and various inventions that defeated the Nazis. This is the same English government who made laws in India and moved forward towards acceptance of homosexual individuals in later decades, whereas India was still carrying the same centuries-old law and order. It doesn’t matter that he received back the respect he deserved (in 2009) as it cannot undo the mistreatment he might have gone through.

Whenever we watch romantic movies it mostly portrays two people of opposite genders madly in love with each other. If it contains homosexuals there would be few glimpses or guest appearance of junior artists for few minutes who behave less masculine despite being male or vice versa. There is a confirmation bias among most people that their usual behavior or expression would surely be of opposite gender. There are no serious movies of real struggles of a person who grows up confused as a teenager as he sees girls and boys having crush towards one another and he just doesn’t feel it natural, him being bullied, and then the self-discovery at the time of adulthood that he is not straight and it’s no big deal.

People in general label what’s “natural/normal” and what ought to be “unnatural” due to the usual scenario they have been watching from the beginning. When it comes to marriages most people are reluctant even if someone is out of their “norm” and that includes inter-caste or religion marriages, or somebody belongs to a different race, let alone of the same gender.

The Law and Order are not supposed to be based on personal opinions or emotional bias. It should radiate equality in all aspects, be it gender, financial status, social standards, political power, and sexual orientation. If age-old section 377 wasn’t decriminalized, the constitution was just being contradictory to itself as it claims to give equal rights to each Indian citizen. The law has already been made but the discrimination does not seem to cease. 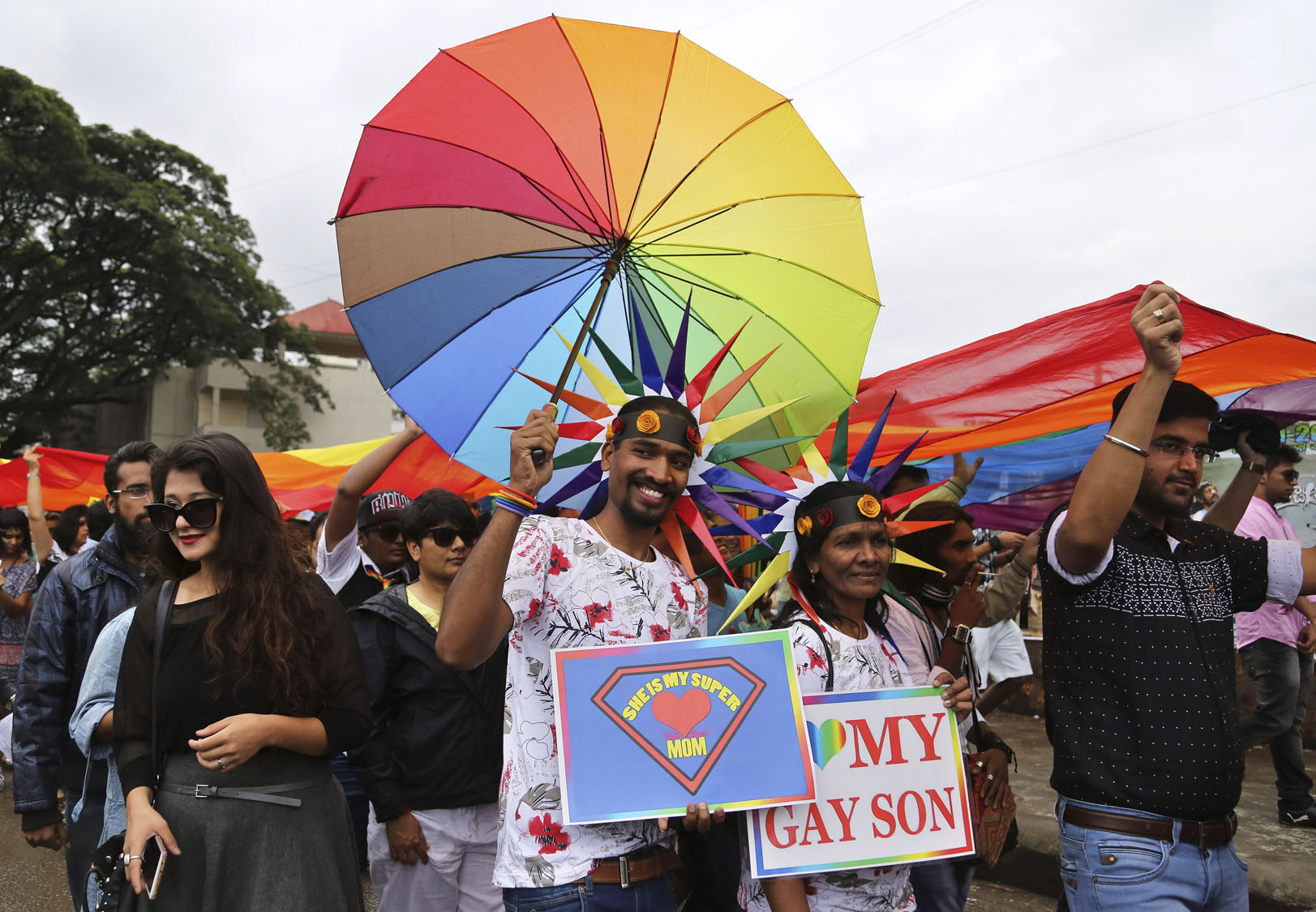 There is an ick factor among heterosexual individuals since they cannot relate at all. But there is a lot more into this. People don’t understand someone else’s perspective or they are too immature to show concern if they don’t belong to the ostracized groups of different forms. For instance, why would I bother for someone who was discriminated just because they behaved outside of other’s expectations, or labeled as being someone that may or may not be true because I am not them?

Moreover, most individuals that we see around are too scared to be judged, first of all. If you support gays and lesbians you would most likely be labeled as one of them. So, does that also mean that fighting for animals rights, people suffering from AIDS, and differently abled implies that I am one of them? Can’t men support for women’s rights? Is that necessary that we need to be “one of them” to fight for anyone’s rights?

Oh, I didn’t know that Neil Patrick Harris and Jim Parsons are gays! They were my favorite!

I have seen people instantly disliking someone after learning their sexual orientation that is considered “abnormal”, the same people who adored before. Being romantically interested in same or opposite gender is supposed to be personal, and everyone is a different soul who has countless other traits.

Revising the section 377 is a landmark judgment by the Indian Supreme court. If some people aren’t comfortable they must educate themselves as there is nothing wrong with those individuals who cannot get attracted to the opposite gender because of natural inclination, but with those who don’t feel it right. So, if you witness somebody as being a homosexual or they confess in front of you or someone else verbally, do not get panicked. They wouldn’t harm you, at least not because of their orientation. What I mean to convey is there are good people and bad people but that is not in accordance with whom someone is intimately attracted to. Can’t we just let people be what they actually are? They are not different species and may like sports, or artwork, or music, or dancing, just like we all do. There is a unique individual behind each and everyone and there’s more on to what we’ve set in our heads. Let’s explore humanity the way it should be, a wide spectrum of functionality and behavior.