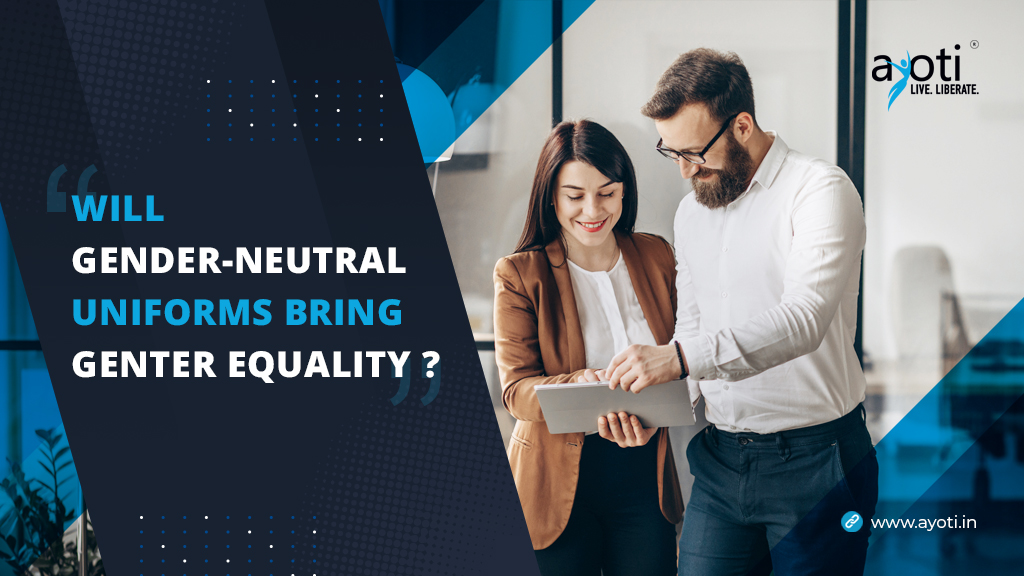 “Girls in skirts and boys in trousers”. Since time immemorial, this has been the dress code followed by most academic institutions. When it comes to gendered norms imposed on children, it is as common as blue and pink. However, with the rise of social media and a better understanding of the gender spectrum, people have begun to question the purpose of these various uniforms.

A lower primary school in Kerala has implemented gender-neutral uniforms for its students, reportedly supported by 90 percent of the students’ parents. Similar policies are in place at two other schools in Kerala.

Gender in the Workplace

This debate over gender-neutral uniforms is not only for schools. This is a discussion that needs to take place in workplaces worldwide.

Schools and workplaces should be welcoming, inclusive, and accepting places where everyone can be proud of and celebrate their authentic selves. A safe environment where you can be yourself at work and school. There will be no hiding or anything else. Putting yourself out there as the authentic you is what everyone dreams of.

Dress codes are often overlooked in creating a diverse and inclusive environment in today’s workplace. Many businesses attempt to implement a “one-size-fits-all” dress code but are unaware that this can exclude a large number of employees. When you fail to consider each employee’s needs–whether religious, gender or cultural–it can lead to workplace conflicts.

The five essential components listed below will help you create an inclusive dress code that promotes diversity and creates a comfortable environment for all employees.

If a quadriplegic employee cannot wear his uniform because he cannot use zippers or buttons and it causes discomfort when he sits in his wheelchair, an accommodation must be made. While both of these examples can be handled on a case-by-case basis, you should consider potential issues when designing your dress code and make sure you can easily make accommodations.

Hairstyles are a frequently overlooked aspect of a dress code. Not everyone has the same type of hair, and hairstyles can be an important part of a person’s culture or religion.

Even if it is not a legal issue, respecting an individual’s freedom of expression in the workplace is critical. A restrictive policy may deter diverse candidates from applying in the future, and it may also harm your company’s reputation with its customers.

Many religions have specific clothing requirements, such as a practising Muslim wearing a hijab, and organisations must accommodate religious practices. If an employee requests a reasonable accommodation to continue practising their religion, the employer must change the dress code.

The employee may only wear the garment during specific holidays, or they may wear it all year; in either case, your organisation’s dress code should be adjusted to accommodate their clothing choices. It is also critical to include language in the actual dress code stating that religious attire is permitted so that employees feel comfortable practising their religion rather than fearful of breaking the rules.

Like the preceding example, the traditional dress is another frequently overlooked component. You should exercise caution if you intend to restrict traditional dress, such as African or East Indian attire, such as the Sari.

Instead, try to embrace these cultural differences and incorporate them into your dress code.

Make sure your dress code is written in a way that does not favour one gender over another. A company’s dress code should be written, so that gender stereotypes are avoided, and it should be consistently enforced.

While it is legal to require men to wear suits and women to wear skirts or dresses, it is based on gender stereotypes. Because of how they identify, a trans employee may feel conflicted by this stipulation.

Furthermore, because most items in a dress code tend to target garments worn by women, your code should be as gender-neutral as possible. Allowing employees to use their best judgement and always err on the side of caution is one way to ensure your code reads gender-neutral.

Workplaces to be Gender-Neutral and Inclusive for Everyone

Organisations must take appropriate steps to address challenges solely driven by gender and become a barrier for women. Employees in a gender-neutral work environment are encouraged to be empathetic and responsible to everyone’s needs and be open to diverse personalities and opinions, resulting in truly inclusive work culture.

Organisations must use less gendered language in their day-to-day operations as more millennials describe themselves beyond the confines of traditional gender labels. The use of gender-neutral pronouns such as “they/them” and gender-neutral titles such as “Mx.” (in place of Mrs. and Mr.) in the workplace can set the tone for an inclusive tone.

Introducing gender-neutral uniforms at the school level will instil in the children’s minds at a young age that all genders are equal and should not be subjected to discrimination. This is also true in the workplace. Gender neutrality practice can help you break free from the gender binary and conduct yourself the way you want. It encourages people to exercise their true right to free expression.