Is it true that women hate each other OR just a stereotype?

Most of my teenage years were spent in the never-ending struggles with studies, setting a precise direction to determine where exactly I was heading. I would always judge people based on who they were, not by their gender. So, I did not actually stereotype anyone in particular about who fits where. There were people who would misbehave, who were mostly girls. What I currently realize is, it might have something to do with my own gender because we all would lie in the same boat. ALL of us wanted to be recognized by people as the superior ones, and it was quite obvious everyone couldn’t make it at that time. The methods differed but we had the same goal – it was all about pleasing people, our male counterparts to be very exact!

I grew up watching Disney princesses who didn’t have female friends. The role of another woman was to be a rivalry or a vamp who would plan and plot against those positive personae. So, what’s the deal? Is it just a stereotype or women really hate each other?

If I say, reaching the heights and maintain that supremacy, it implies being the most beautiful, confident, and the most desirable woman. Let’s face it – we ALL did this – smear campaigned against the one who we felt were more physically attractive than us, who had a sexual appeal, and because of that, we felt threatened somehow; even if that particular woman was not going to steal our husbands and boyfriends. We all felt that her negative image would somehow uplift us and that we are better of a person in some way.

“A depressing number of studies show that, unlike men, women will often dislike one another for no logical reason.”

So, what should be considered as being legitimate? The one who intends to destroy your life, or manipulates or abuses you somehow. Now that being said, I would also like to state a real incidence, by the one who used to be my distant relative and an aged lady.

She loved her husband a lot. She would keep on bragging about him that how much he earned, what a luxurious life he would offer her. On the other hand, he would also beat her with a wooden stick for many years to the point of breaking it. She never told about this, but I heard it from elsewhere. I am mentioning this to compare the treatment an average woman likely to give to a man, and wouldn’t hate him for what he did. The same woman wouldn’t shy away from backstabbing against another lady who was not a potential threat to her, quite literally! And I was like, “What’s wrong with you woman? Stockholm Syndrome, is it?”.

It is a common scenario in a typical orthodox household that if a man beats his own wife, the other women belonging to the same family secretly enjoy this chaos going on. They might pretend that they have the concern to the victim, but they don’t actually mean a single word.

When did it all start? Why are women so mean to each other?

It goes back in the history during the medieval times when it was a necessity to be dependent upon men. Women were deficit of their rights to vote, earn, travel, etc. They either would marry a financially stable man, or ended up being homeless, or even worse – A prostitute! Some would use their palatable skills (out of wedlock) to survive the world filled with male dominance. Others did nothing but slut-shamed them because they always worried their husbands would leave them once they divert their mind, and it continued to this day.

Since centuries, women always measured their worth by how they were treated by men based on their perceived attractiveness. It was literally the holy grail of their existence. To this day, I don’t think most of us are satisfied with how we look. It’s always another woman who is going to rule our mind based on what hairstyle she keeps, what outfits she wears, how many male-friends she has, her thin body structure, and then we compare our body’s cellulite and the limited options of the way of dressing we think we have the ability to flaunt. We cannot cross a certain line because we are so self-conscious of our image. Most of us obviously don’t have that magnitude of boldness. 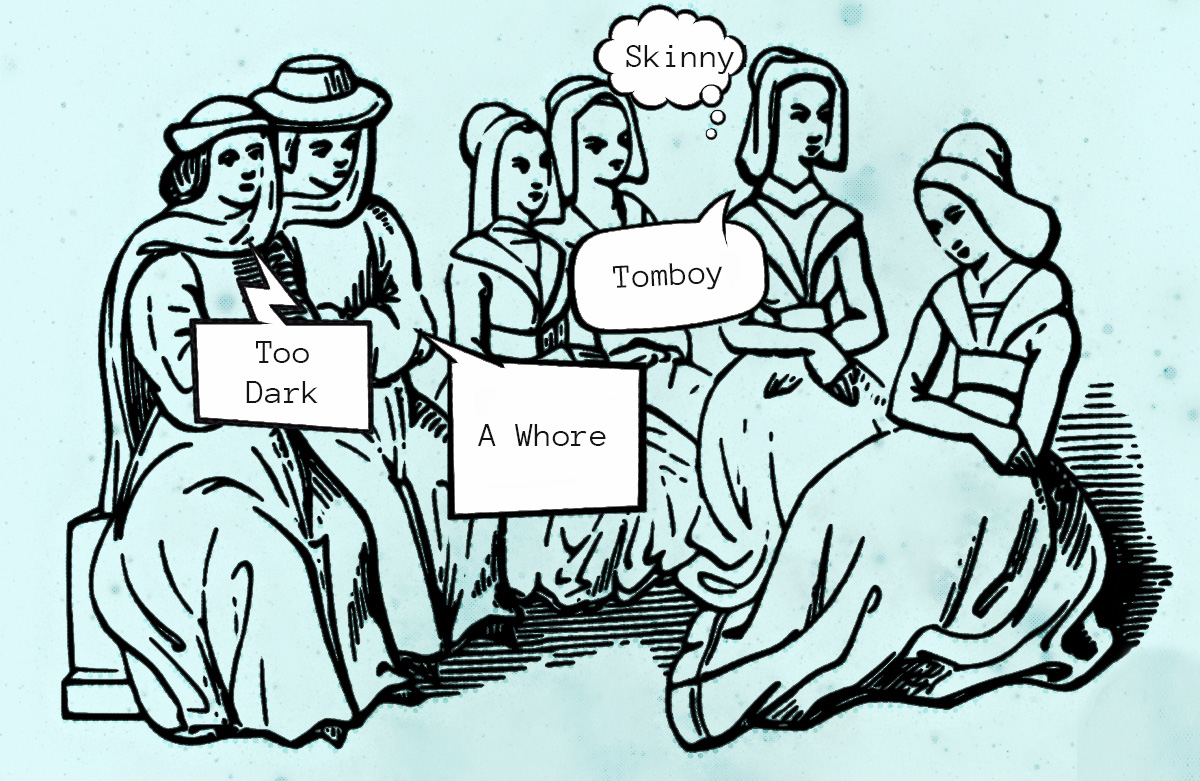 So, does it mean that men don’t have rivalries? Don’t they compete with each other?

It is a fact that the cut-throat competition exists everywhere. But you will see men more often do not hesitate in making friends with those who are at a higher position, look physically attractive, and keep lots of girlfriends. And I am not talking about being normal acquaintances, but close-knitted buddies. Women, on the other hand, either don’t make friends, they think are out of their own “zone” or act superficially.

Do love-hate relationships exist in their DNA or is it just a confirmation bias?

So, it is not always a hundred percent hate, but a constant battle of love-hate relationship with their mothers, sisters, in-laws, you name it! It is a kind of an intense feeling among most women, which I think wouldn’t be understood by those keeping the T hormone.

I don’t think the feminists would ever achieve the kind of equality they always expected and demand currently. This is because deep down they don’t genuinely support each other. There are, of course, exceptions and I personally know some women who are extremely encouraging and wouldn’t gossip behind each other’s back. But, at the same time, I also feel that most of us need to grow ourselves to more mature human beings.

“An overwhelming number of women did not consider themselves to be ‘typical girls’ and preferred to be friends with guys.”

Most women don’t like to be addressed as “typical girls”. We are all familiar with the reason, and that is being the drama-queens who would often speak a lot and loud and wouldn’t shy away from dressing-up girlish, expressing the way they feel, shopping together, and the most common of all – gossiping about every single thing. It directly implies that being one of the girls is somehow bad and being one of the guys is cool to flaunt. This then refers to the ironical confirmation bias which is deep-rooted in all of us.

Now, let’s understand what confirmation bias is. You think you know something which might be or might not be true. It is the foundation of what we are going to consciously accept or decline in our mind whatever goes on in our surroundings. If someone told you when you were a child that women are involved in gossips a lot. You will more often notice women involving into the gossips, but ignore the fact that men too are equally indulged. This is because your mind was negatively biased towards a particular gender and you simply confirm for decades after decades that your hypothesis was indeed correct.

Why don’t we all let another woman do whatever she wants, and get bothered only when she intentionally affects our lives? I totally get it that we all judge each other in some way. We may also like or dislike somebody, but showing hate is what I call going too extreme even if a particular person is simply leading her own life in her way without practically bothering you. I would also like to give this piece of advice to men as well, but the thing is we are all women and that makes us all stay united and be supportive. We cannot get the equal rights if we become our own rivalries.