Is your child being bullied? Types of bullying discussed in detail

Bullying or getting bullied by the peers has become a big concern these days. It existed previously also but the rise in the use of social media among people has given it the chance to magnify to many folds. It now affects countless individuals in different forms. Most individuals like to stay supreme and hence they capture the best images to flaunt. The social media also have a flip side. It easily convinces people into believing something which might be or might not be true. This is where the negative criticism begins which has no limit on the basis of the reach and the time interval till it is going to stay viral.

Bullying can happen to anybody of any age, gender, ethnicity, sexual orientation, and anything that does not match the bully’s norms of “normal”. It can happen to someone in the family by other family members, distant relatives, or at workplace, school, or college. In general, it occurs to somebody who seems less confident, is isolated or has very few friends. This reassures the bullies that (s)he is an easy target and chances are higher that he/she isn’t going to speak up for him/herself.

In case of children, most of their classmates don’t support the sufferer because they do not want to get involved in mind messing chaos, or some of them get scared of the bullies. Others even get convinced that the sufferers are nerdy and not-so-cool people and somehow deserve the treatment. The school authorities may or may not support the kids. It all depends on the school management like how much they ought to be involved and to what degree they actually interfere in the matter. If no one supports them, the scapegoat gets convinced that (s)he deserved it. They do not share the matter with their parents as well because they are not sure about their reaction.

“Kids who are obese, gay, or have disabilities are up to 63% more likely to be bullied than other children. Students said their peers were most often bullied because of their appearance, but the next top reason was because of actual or perceived sexual orientation and gender expression.” 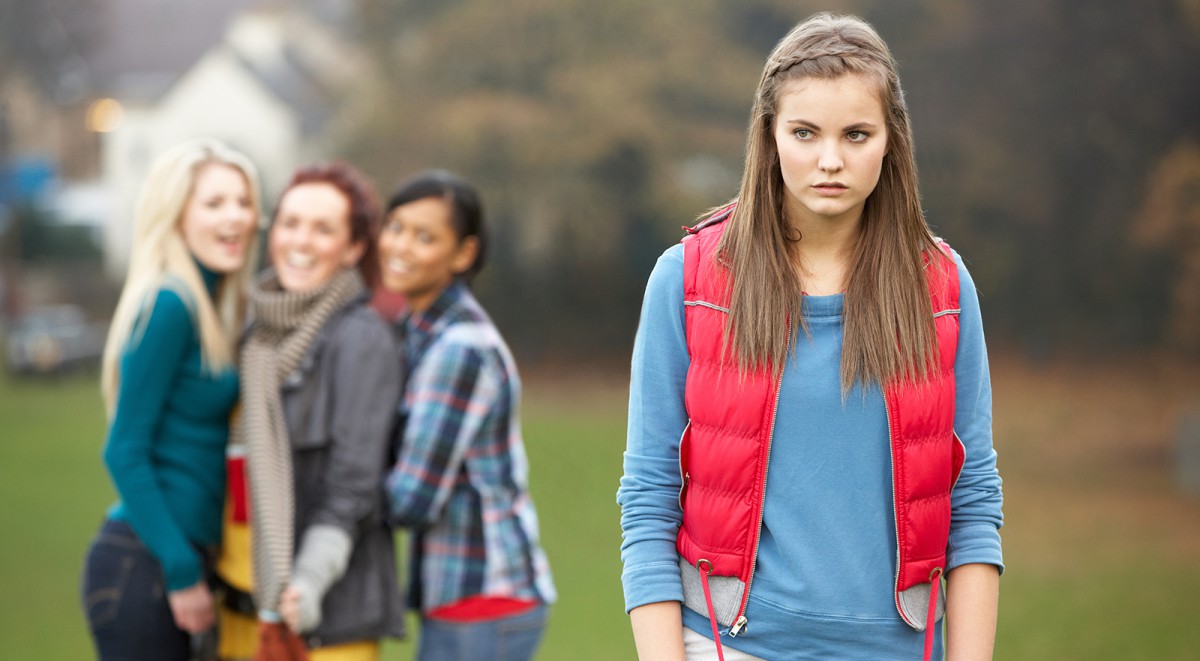 It threatens people into committing self-harm, suicides, etc. It can also lead to executing vengeful acts such as harming other family members of the perpetrator, literally murdering the bully or the whole group who were directly or indirectly involved. It leaves deep scars in the mind of the victimized individual, who, if not given the proper psychiatric counseling, would take unwelcome steps even after decades. Bullying has the ability to question a person’s worth and (s)he ultimately loses his/her self-esteem and confidence. Before knowing whether your child is being bullied at school, one must first know exactly what its definition is.

“86% of students said, “other kids picking on them, making fun of them or bullying them” causes teenagers to turn to lethal violence in the schools.”

There is always a fine line between “just joking” around and sabotaging someone intentionally. Some children are extremely sensitive towards remarks. So, if they seriously take nearly all verbal statements directed at them, the parents must watch out the reason behind it. It might be the reason that they have a history of verbal abuse, OR they may be facing different individuals who they think are not taking them seriously in terms of their worth. They could also feel being ignored by their fellow pals, and as a result, they find it hard to channelize their emotions and get overwhelmed. Such types of children have trouble in judging people’s behavior, even after they grow up.

It is possible that some individuals might be bullying them, others might not be. The parents and the caretakers must educate themselves and let their children know the difference. In general, most kids are going to find out by their natural instincts or “gut feelings” that something isn’t right. If their friends tease them and won’t stop even after warning, it could turn to serious bullying and that can occur for several days or weeks, or even years!

Following are the types of bullying that are more often done by the peers:

On the basis of setting – in-person (offline) and online

All kinds of abuses, whether it is verbal, social, non-verbal, direct or indirect, if done without using the social media or internet connectivity, everything comes under offline or in-person bullying.

The online bully, most often refers to cyberbully is the most common form of intimidating the target victim without even contacting him or her directly. People blatantly use the profile pictures and make a new fake profile, or publish real or photoshopped images and/or videos to the outside world with an intent of shaming them. 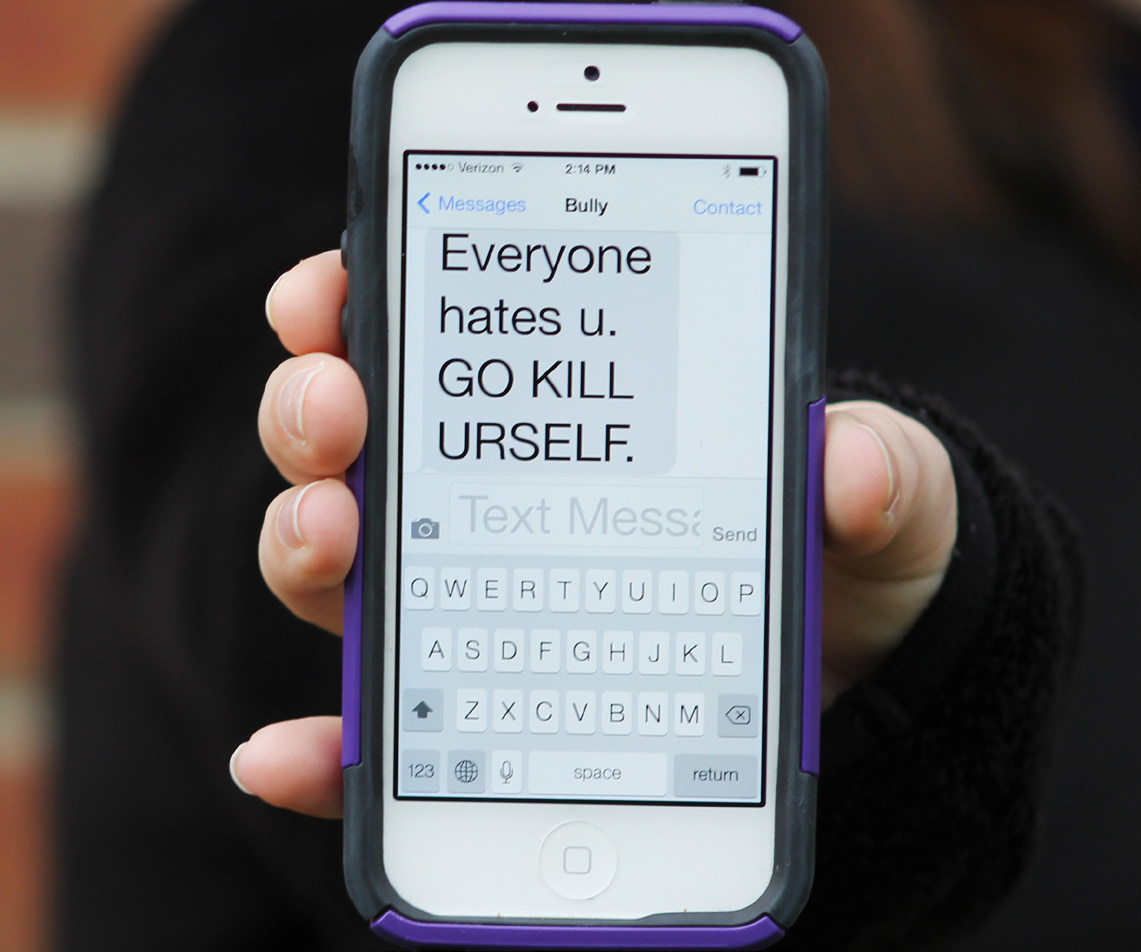 The direct bullying is obvious to witness because the oppressor directly speaks mean stuff, physically harms, or gives clear signals like making fun of the target person with his/her friends on a regular basis.

The indirect bullying involves spreading false rumors about a person in order to torment his or her reputation. This involves lots of people who might not even know the actual facts, but still somehow get involved in speaking illogical statements, calling names, and hence the chain continues.

On the basis of visibility – overt and covert

Overt, also known as traditional bullying, refers to name-calling, making direct insults and threats, physically harming, and all kinds of legitimate acts that could be taken into account as proof. The covert actions are too indirect to understand, such as making facial expressions and bodily gestures that show hate towards a particular person. It also includes restricting him or her from talking to particular individuals or limiting where they can or cannot sit during lunch or classroom.

On the basis of behavior – verbal, social and physical

On the basis of the oppressor’s behavior, it could be verbal, social or physical, OR the combination of two or more. The verbal, as the term itself suggests, refers to name-calling, and speaking mean things against the person. It could be against the sufferer’s religious beliefs, race, gender, sexual orientation, ethnicity, country of origin, and so on.

If the intimidator smear-campaigns against the target in front of others by constantly sharing images or some kind of private information that is not supposed to go public, we call it social bully. This ultimately leads to social boycotting by the general public, and ultimately causes great negative impact to the point of chronic depression or even taking extreme steps like suicides.

The physical behavior refers to harming physically, for instance, kicking, punching, pinching, slapping, or even stealing their belongings. In more severe cases, it might also result in compelling someone into doing something they (victims) consciously know they shouldn’t be doing by terrorizing them of sharp weapons, gunpoint, rape threats, etc., or actually using those weapons, raping the target, and so on.

Whether it is verbal, social or physical bullying, it can be in the form of in-person/offline or online, direct or indirect, overt or covert. 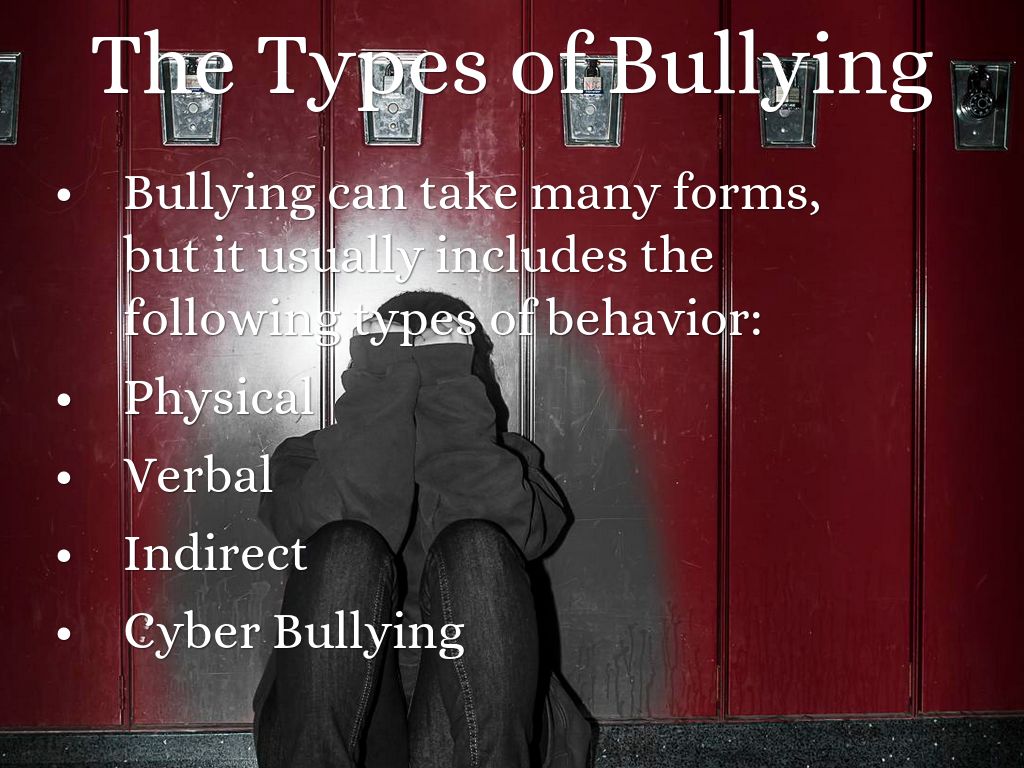 The physical harm shows clear signs of bruises, cuts, sprains, fractures, etc. But the psychological impacts are not easily noticeable. The person may develop being fearful always, even if the matter is resolved. Being the scapegoat can lead to anxiety, chronic stress or even depression, because of self-doubt they eventually develop. The person can be suicidal and therefore has high chances of attempting it.

It can happen at any place. The immediate family member or a distant relative can also be a threat to a child. Always remember that bullying is done to uplift a bully’s own inflated ego. They are not that confident like they appear. Even a slightest of criticism threaten them and they feel powerless. Therefore, in order to feel supreme always, they most likely try harder if the victim tries to fight back with emotions, for instance, crying, acting fearful, getting angry, and so on. These emotions are enough to provide a kind of psychological supply to feed their shallow outlook with a belief that they rule their (perceived) kingdom, and everyone else is their slave.

In order to stop the bullies, teach your child to ignore those who mock them because all they want is attention and a reaction. Suggest them to practice “poker face” so that the perpetrator gets bored and goes away by him/herself. If the bully teases him/her at the bus stop, then go with your children till the bus arrives. Warn those bullies to never interfere, else they would face the consequences. You may also go and talk to their parents about what is happening. Many times, even the parents are unaware of their child’s activities.

If you have noticed that your child has been acting differently than his/her usual behavior for many days, then you must start intervening by knowing more. Ask his/her friends about the situation, his/her whereabouts from the school teachers, classmates, etc. It is best that you should balance your attitude towards them. This means if you behave too strict, they wouldn’t open up in front of you. So, always keep some sort of interaction with them.

Role of a bystander 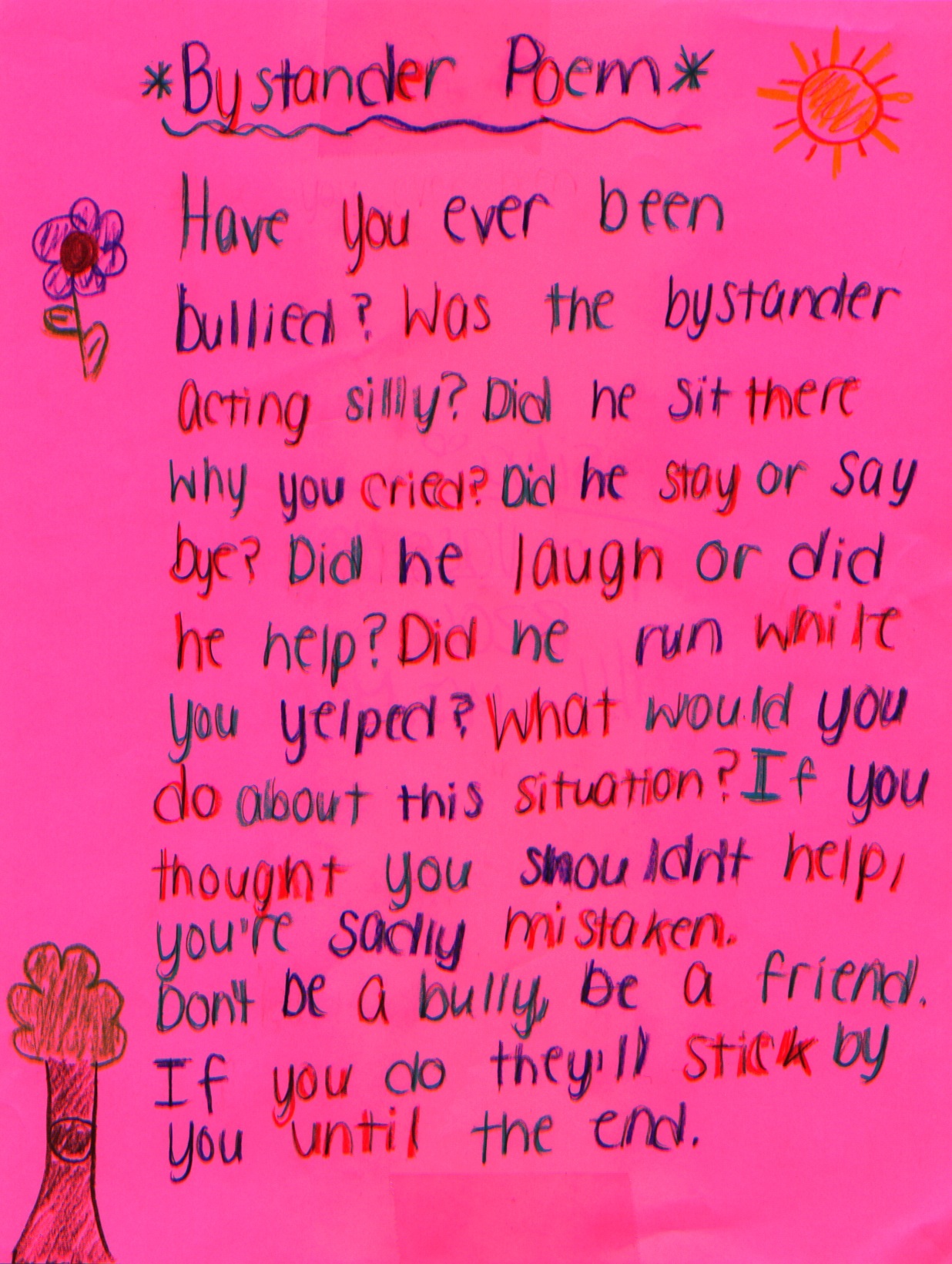 Those, who witness the negative remarks or actions by the offenders upon somebody, must not stay silent. Their job is to take action and let the school management be aware of the circumstances. The witnesses can stop this by raising voice against the chaos. If the issue goes too serious, it is the bystander who ought to stand with the victim(s) and make a halt once and for all.

If the things are going out of control, the best bet is to complain the authorities who are supposed to involve, such as the school principal, counselor, teachers, etc. If the actions are going too extreme like physically harming, then the involvement of the police, Law and Order may be required. Your child who is in trouble should be given proper psychiatric counseling, so that (s)he recovers from the trauma soon and grows into a mentally sound adult who does not hold grudges anymore.

Help your child to involve into something productive such as sports activities, art and craft, singing, dancing, other than getting the much-needed counseling. Teach them that it was not their fault. It had nothing to do with them, but the bully. Watch their activities post trauma, so that they don’t plan for revenge. Motivate your kids to communicate with those who have a positive approach towards life, are more into making a definite goal rather than putting others down. This will eventually help them become kind individuals in the coming future.