9 Self Defense Techniques Every Woman Needs To Know

Most effective self-defense strategies and techniques work to everyone regardless of gender. But women really need them because they’re more vulnerable than men which is proved through many kinds of research. Every women should learn Self-defense skills along with all other basic life skills.

Studies show that one in three women will be the victim of some type of violence in her lifetime. Women also go through many disturbances of verbal and sexual harassment on a daily basis. Self-defense courses for women are common nowadays but only a few take it seriously. In real-time, these kinds of training should include methods for blocking a confrontation from turning physical in the first place.

Learning how to flee from a threatful situation may not sound as exciting as fighting out an attacker’s heart to young people. But knowing the psychology of the attack and attacker is more important. These kinds of approaches will make people understand how harmful a situation would lead in advance.

If you’re an experienced martial artist, the physical techniques included in training sections may seem familiar or low. They are meant to be simple because, while facing an assault, you’ll encounter horror and panic, that is how the adrenaline rush works. You might have heard about or experienced tunnel vision, loss of voice, auditory exclusion, and loss of fine motor skills, these will be in the peak during such situations. Consequently, martial arts techniques may be impossible to execute. If you adhere to proven strategies and simple techniques as explained below, your chance of survival may improve significantly.

Many women who have encountered an assault recollect the instincts they felt just before the incident. Most of them say that they had a bad feeling or felt like something bad is going to happen or the person’s behavior is unusual or suspicious like that. But the majority of them ignore the inner warning signs. Your instinct is the best indicator of danger. The next time you catch that little inside voice, listen and act accordingly.

Don’t present yourself as an available target. The consequence of an action is often decided before the first hit is punched. When you have the chance to flee from a situation before it turns dangerous, use it. If an approaching person seems suspicious, walk away from him. If you happen to see an elevator just with a person and he gives you doubts, avoid that elevator, who knows just jumping to another elevator is going to save your life. Those actions aren’t because you are cowardly it is because you are matured. And that’s how you survive by avoiding dangers. Going through the problem may not be a good idea always, skipping it would be the best! 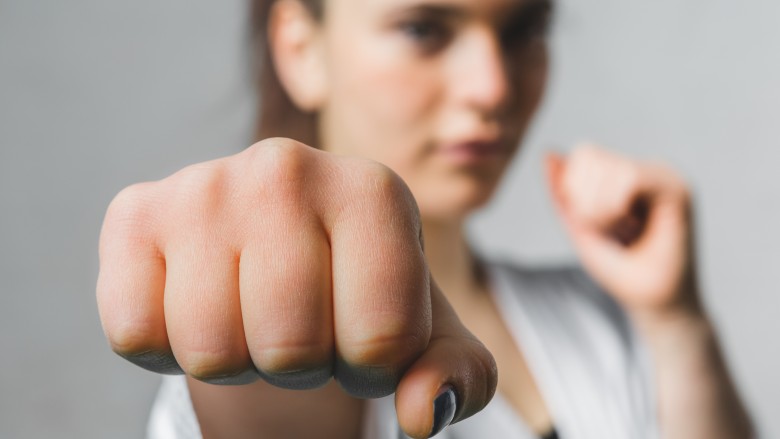 Be aware of the message your body and face conveys to people around you. The one who looks week and vulnerable are targeted mostly Attackers hunt for women who look scared, disoriented or troubled. They look for women who walk with their heads down, lost in thought, and sometimes one who’s with heavy luggage.

Understand that attackers do not want to set a struggle; they want easy prey. By walking with courage, confidence, and consciousness by looking around and keeping your head up and shoulders straight, you’ll significantly overcome the likelihood of becoming a target.

Since childhood, our mothers have trained us not to talk with strangers or not to answer any personal questions outside the home or to trick people who ask such questions. Even after growing up, good verbal skills are an effective self-defense tool, maybe than any physical technique. When a predator involves you in conversation, he’s actually checking you to see if you’ll make a valid victim. An expert attacker is prepared at using his words to freeze you with fear, thus defeating the chance that you’ll try to resist yourself.

Although an offensive verbal confrontation can be terrifying, you have to be sharp enough to show the attacker he has chosen the wrong person. If you stand fearless, remain calm and respond boldly and assertively, you’ll apparently fail his intention. The strength of your voice itself can cause him to avoid you.

5. Be Ready To Give a Surprise Kick

In self-defense circumstances, one of your hidden weapons is the element of surprise. Most predators feel certain that you won’t defend yourself, and you should gain on that misunderstanding. If you assume a martial arts posture, it directly tells the attacker that you know how to fight. In response, he’s likely to be more aggressive. Alternatively, use a confident, carefree stance at first and attack in surprise.

Everyone has one’s own comforts or personal space. When a person with bad intention comes to that particular area, you’re uncomfortable and you will know. When you’re in an adrenalized state, you need a second to respond to an assault. This reaction should be expected when you think about your comfort zone. You should try to have a specific distance between yourself and the attacker. If he begins closing in, you require to use verbal barriers or at least shout loudly so that people around you notice. If he still doesn’t back off, it’s time to hurt him cunningly.

One of the main conclusions of an adrenaline release as I said earlier is the loss of fine motor skills. That means simple movements such as walking with high spirits and head high or pulling your hands out of your pockets can become much more challenging. No matter which martial art you practice, learn methods that are basic and adhere to them in a self-defense scenario, for instance,

• Eye strike. The eye strike can be applied in a standing or recumbent position. Often, simply hitting your fingers toward your assailant’s eyes will make him retire. Even if you don’t make contact, it forms space to set up a more destructive blow.

• Heel-palm strike. Hitting with an open hand overcomes the possibility that you’ll hurt your hand and allows you to attack from a non-confrontational posture in which you’re keeping your hands up and open while you initiate verbal boundaries. Then, if your attacker steps into your comfort zone, hit! he should get it right in the face.

• Knee strike. This technique is advised over any type of standing kick because it is easy to use and can be delivered while you stay close to the ground, which is significant when you are in an adrenalized condition. A knee to the private parts can end a fight instantly.

8. Don’t Panic If You Are Knocked Down

More often, women end up on the ground when they are encountered with an attacker. But the thing we all should know is most assailants are not skilled ground fighters; they’re tyrants who are used to knocking women down and making them obey. Master that the heel-palm strike and eye strike work well on this kind of a situation. The side thrust kick works in a variety of scenarios. If you’re on the ground and your attacker is standing, it gives you the advantage to hit. That means he’ll have to expose his body to your kick if he wants to touch you.

Knee strikes also function efficiently on the ground. While you cope with your attacker, he apparently won’t defend his groin. Once you see a chance, get close enough to strike.

The fight isn’t over until you reached somewhere safe within your circle of family or friends. Therefore, you must be completely committed and focused. During a fight you should not pause, If you do so you are giving up the initial advantage you obtained. Once your adversary knows you can attack, it becomes more challenging for you to predominate. To survive, you must continue your attack until it’s safe to stop hitting and leave.

I hope you are aware about the effective self-defense devices and handy techniques practical during vulnerable situations.

Anyway, These are just strategies, this is not enough to survive, you should have some practice. Ayoti is wholeheartedly into the wellness and empowerment of women. Paritrana is a self-defense training program arranged for groups of girls/women to get the practice of the above-mentioned techniques and more physical and psychological matters about attacks against women. Inquire and enroll ASAP.

Tags: self defense for womenSelf defense training in kochiwomen safety